CONSAERO now has four A321-200 leased to AirBlue, Pakistan, under asset management on behalf of a major lessor.

CONSAERO Projectmanagement GmbH (a 100 % subsidiary of CONSAERO GmbH, responsible for the aircraft asset management) was retained by Hawk Bay Leasing Ltd. (Ireland), a subsidiary of VEB Leasing (Russia), to support the owner to manage the four leased A321-200 aircraft (MSN 5966, 6016, 6067 and 6119) to “airblue” (Pakistan) from a technical perspective during the lease term. The aircraft were delivered between January and March 2016.

Airblue is Pakistan´s second largest airline (privately held), was founded in 2003 and started operations in 2004. Presently, airblue has 12 A320 family aircraft in commercial operation. 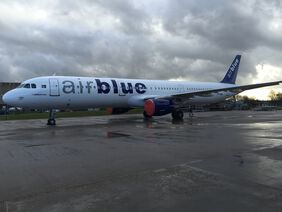 We use cookies and load external data if you allow this. You will find further information about it on our privacy page.